It is possible for competitors to arrive at Evian for departure on Thursday morning, but before 10 o’clock am. 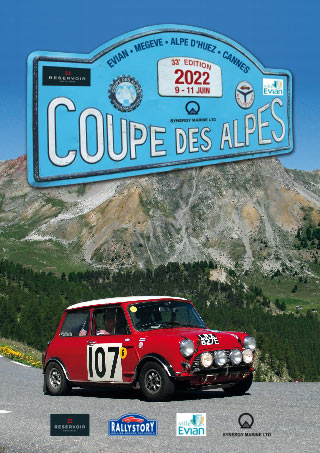 LEGEND - For more than 30 years, the COUPE DES ALPES has been an unmissable date on the calendar of major historical automobile events. The quality of the cars, the beauty of the landscapes and the enthusiasm of the organizing team make it one of the most renowned rallies in Europe, with 150 participants taking part, 15 or so nationalities represented, 25 makes and around 100 different models of car.

PASSION - The three days of pure driving pleasure offer a unique occasion for the owners of classic sports cars to drive through the grandiose landscapes of the Alps down to the Mediterranean, with the opening of the mountain passes of the Route des Grandes Alpes, which have only just been cleared of snow.

THE SUMMITS - The programme is for the most part new this year, with a particularly brisk pace following the great routes taken by the COUPE DES ALPES in its heyday. The participants will still climb some twenty peaks, many of which were not part of the routes taken in previous years. In the Northern Alps, the Col de la Ramaz is open once again after work lasting many years. The second day of the rally will take us further west than usual to explore the Chartreuse Mountains and the best-known passes there. The route on the final day is magnificent, with four passes above 2000m (including the Col de la Lombarde at 2347m/7700ft).

PRESTIGE - The rally will start, as is customary, from EVIAN on the shore of Lake Geneva and stop for the first night in the prestigious Savoyard village of MEGEVE, and then, after lunch at the Château du Touvet, at the top of the 21 hairpin bends climbing up to l’ALPE d’HUEZ for the second night. The traditional English picnic will be a highlight of the final day before the famous Croisette in CANNES on the edge of the Mediterranean welcomes the rally at its finish.

CONVIVIALITY - RALLYSTORY has always made the professionalism of its organization, the availability of its management team, the quality of the accommodation and meals, the luggage service and the mechanical and breakdown assistance key requirements. The 33rd edition of the Coupe des Alpes will be no exception: as always, we will strive to offer you an unforgettable experience combining a friendly atmosphere and the passion for driving.

THE MINI TAKES THE HONOURS - A particularly iconic model, with an extensive tally of results in competition, both on track and in rallying, the Mini left its mark on the history of the COUPE DES ALPES in the 1960s, with Paddy HOPKIRK’S victory in a Cooper S in 1967 the culmination. The Mini (from 1959-1992) will take pride of place in 2022, with a particular focus on the models which competed during the rally's heyday.

THE CHARTREUSE MOUNTAINS - A major site in the world of rallying, and for the COUPE DES ALPES in particular, the Chartreuse Mountains in the Isère offer some steep routes which we have been unable to use in recent years due to major roadworks. The Granier, Cucheron and Coq passes are legendary crossings for rally drivers. At the foot of the mountain, the Château du Touvet will provide a moment’s rest in refined surroundings before we tackle the passes of the Belledonne mountain range.

COL DE LA LOMBARDE - At 2347m (7700ft), the Lombarde is a crossing point between Italy and France, between the Argentera and Mercantour, and a wonderful road to drive. The hairpin bends up to its summit make for a well-earned climb. The Coupe des Alpes included the Lombarde pass in 1965, but at the time it was not yet paved!

ARRIVING IN CANNES LIKE A STAR - The parc fermé at the end of the rally will be in the very centre of town, on the esplanade Pantiero, with a stunning view over the yachts in the old port. The most famous luxury hotels on the Croisette in CANNES, well used to accommodating film stars, will welcome all the participants of the COUPE DES ALPES for a magnificent finale.

They support us and accompany us on our rallies

Keep informed about our company and our ralliesI subscribe!

Since 1987, RALLYSTORY specializes in the organization of automotive events. The adventure began with the "Trophée en Corse" to expand over the years with a series of rally that is now become the 'classic' as the "Coupe des Alpes" and the "Rallye de Paris", or more recently the "Marrakech Tour ". But the spirit has remained intact ...